Dr. Michelle Stack has forged a formidable career path in education, government, advocacy and academia–but for her latest project, she’s returning to her roots.

Before entering academia, she worked in policy positions and as an adult educator, and then as a communications director in an office that, investigated child deaths and reviewed plans for children in care. She now works as an associate professor in the Department of Educational Studies, a position from which she continues to engage actively with the public. As a public commentator, she has regularly appeared in news programs and several CBC radio channels (CBC 180, BC Almanac, On the Coast, and The Early Edition), and her work has been featured in The Globe and Mail, the National Post, and the Conversation. Her interests are wide-ranging: for the Conversation, for instance, she has written on the Nobel Prize, university rankings (also the focus of her book-length study), ableism and the classroom, and white supremacy in the academy. As an educator, she similarly encourages students to think creatively about their scholarship by adopting public-facing mediums like the op-ed or stand-up comedy.

But Dr. Stack’s interest in education and public scholarship has much earlier beginnings. “Growing up in a housing co-operative (a long time ago),” she reflects, “very much influences my research and ways of thinking about public scholarship.”

One of her latest (of many) projects, Co-operatives on Campus, seeks to promote affordable student housing on campuses through housing co-operatives. She wrote about university co-op housing for the Conversation in 2021, in conjunction with her study published in the International Review of Education that same spring. She’s currently producing a podcast (an episode can be found here), and held a series of webinars on housing co-ops with the Peter Wall Institute. As she notes in one of the series’ webinars, co-ops and universities can unite and expand a shared vision of “living, learning, and working together in more equitable ways.”

Dr. Stack was recently awarded the Public Engagement Award (PEA) by the Public Humanities Hub. In the following interview, Dr. Stack reflected on public scholarship in the context of her current project with housing co-operatives on university campuses.

Briefly describe your project(s). Who were your collaborators in this project? What were/are your project goals?

The project I am most excited about is Co-operatives on Campus. I have had the opportunity to work with colleagues from BC and beyond, including–

We held webinars in conjunction with UBC’s Alma Mater Society (AMS), which is doing some great work on affordable housing for students, including the possibility of co-operatives.

I’m just finishing off some podcasts that explore the possibilities of co-operative post-secondary institutions and co-operatives within post-secondary institutions. The project has led to some great opportunities to meet other researchers and advocates in the area including the Community Learning Office at UBC to develop a project with students focused on climate justice and the possibilities of co-operatives. I’m also part of a group Vancity is leading on improving co-op infrastructure in BC.

Through the project, we came to learn about the cutting-edge work on co-operatives by Dr. Shenaz Hossein. I highly recommend her piece Banker Ladies.

What are some of the challenges presented by public scholarship?

Occasionally, like others I know who engage in critical public work, I get told that public scholarship isn’t “real” scholarship. This is a sadly outdated notion of scholarship that puts universities in danger of being seen as irrelevant and lessens our capacity to expand urgently needed public conversations.

Another challenge is that critical public scholarship is often not recognized in hiring and tenure and promotion processes.

The obsession with simple metrics is a problem. Public scholarship takes time to build relationships, and the benefits and risks associated with it depend on the area of scholarship. I think of disability rights scholars who recently fought against the expansion of Medical Assistance in Dying. Major disability rights groups in Canada opposed the legislation, yet they received relatively little media attention compared to non-disabled politicians, legal and health care professionals. Does this mean they were ineffective? No, not at all, but it does mean that ableism is very strong in our society. We need to be careful about creating simplistic metrics for public scholarship that may further marginalize scholars who are doing courageous public scholarship.

What are your future plans for the project?

To work more in collaboration with students and staff on the idea of co-operatives.  I can see bringing people together across the post-secondary system to expand our ways of structuring how we live, play and work together. When I’m giving talks or teaching, I sometimes ask who is part of the university community. I hear students, faculty, and administrators but less often included workers who keep higher education going – the cleaners, gardeners, cafeteria staff, and early childcare educators.  I’ve talked to cleaners at UBC who would love to live on campus but have long commutes by Skytrain and buses because they can’t afford to. This is not fair to these workers, but it is also limiting our ability as a community to be a place to try out more equitable ways of being together that is based on much of the significant research done at UBC. 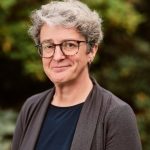 Dr. Michelle Stack (she/her/hers) is a 2021 recipient of the Hub’s Public Engagement Award and an Associate Professor in UBC Department of Educational Studies. View her faculty profile for more information.